The base overlay is included in the PYNQ image for the RFSoC 2x2 board. The purpose of the base overlay design is to allow you to get start using your board with PYNQ out-of-the-box. The base design includes a bitstream with IP to allow you to start using the RF ADCs and DACs on the board. The other main blocks are the memory controller for the PL DRAM, two PYNQ PMOD IOPs to connect to Pmod™ ports, AXI GPIO controllers, an interrupt block, and a system monitor. 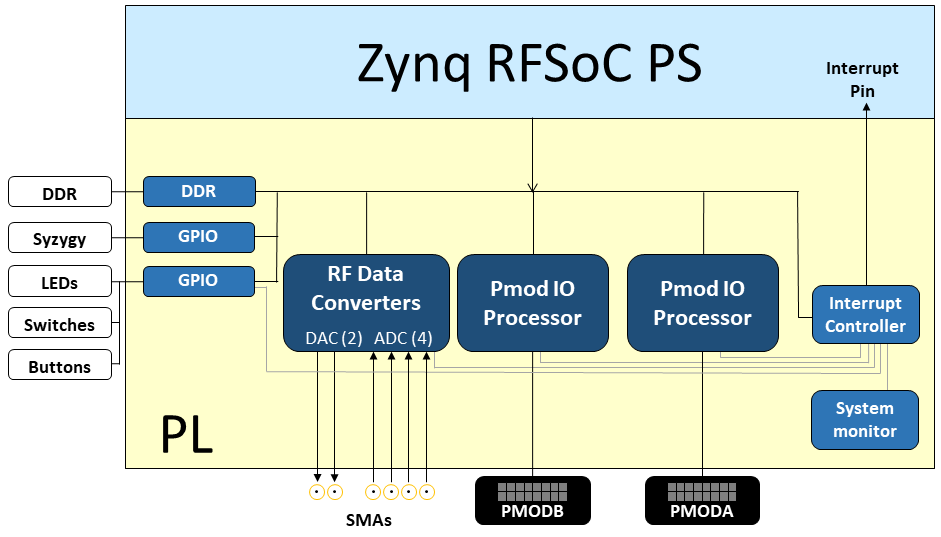 The PL DRAM is mapped to the PS memory map, effectively extending the amount of DRAM available to the PS. This is only intended as a simple example showing how to configure the IP for the PL DRAM. As this DRAM controller is in the PL, it will be slower to access this memory than the PS attached DRAM. It is likely in your own designs that you will make a direct connection from IP in your design to the PL DRAM.

Example notebooks are also provided on the board to show you how to use the base overlay.

Contains notebooks specific to the base overlay for the RFSoC 2x2

The RFDC folder contains notebooks to interact with the Radio IP subsystem in the base overlay and allows you to control the RF Data Converters.

The three notebooks are numbered, and you should try run them in order:

The notebooks cover an introduction to the RF Data Converters (RF DCs) on the RFSoC2x2 board, RF board setup and a tutorial on inspecting and manipulating captured RF ADC data, and creating a Spectrum plot in PYNQ and how to perform a spectrum sweep.

The following notebooks are in the board directory:

The base Overlay includes two Pmod IOPs. The MicroBlaze and Pmod folders contain notebooks showing how to use Pmods with PYNQ, and using the MicroBlaze processor inside the IOPs. These notebooks can be found on other PYNQ boards with Pmod IOPs.

Refer to the PYNQ Pmod IOP and PYNQ MicroBlaze documentation for more details.

Rebuild the base overlay

The following steps describe how to rebuild the base overlay. As the precompiled design is already available in the PYNQ image for the board, you only need to do this if you want to study the design, or make a modification.

Get the source code

The current base design was built using Vivado 2020.1. You need to make sure you have installed the RFSoC devices. If you didn’t do this when you installed Vivado, you can add them from the Vivado help menu. Other versions of Vivado are untested and are unlikely to build this design without modifications.

On Linux, make sure you have sourced your Xilinx tools (Vivado 2020.1), change to the following directory and run make.

This will build a Vivado project with the base design for the board. The make file automatically calls the Tcl files described in the Windows flow below.

And then, run the following command in order to create a Vivado project and build the block diagram for the base overlay:

You can now review the block diagram, which should look similar to the image below. Click the image to view a pdf of the design.

You can run the following commands to rebuild the bitstream.

Remember the precompiled bitstream is already loaded on your board, so you do not need to rebuild the bitstream unless you have changed something in the design.